My apologies as I'm a few weeks behind on this very important post. At the beginning of January Uriyah came to me in a panic. "Mom, my tooth is moving!" I laughed and explained to him that that is what happens when you get older. All baby teeth must fall out so that the permanent teeth can come in. Well he got real excited over this info and proceeded everyday to push and prod on his loose tooth. One evening a few weeks back, he came to me to show just how far he could push his tooth out. I challenged him to reach in and yank it out, completely thinking he would freak out and shoo my idea away. Lo and behold he called my bluff, reached right in and yanked that sucker out! I was so flippin' proud of him!

Now with the tooth out we had to move onto the important business of the tooth fairy. I sewed up a little felt pouch and Uriyah quickly placed his tooth inside. He awoke in the morning to find that the tooth fairy had taken his tooth and left a note stating if he passed it along to mommy or daddy he would get a cool five dollars. Uriyah brought a robot with his five dollars which he has already taken apart. Uriyah loves taking things apart which I'm told makes him a great candidate for a future engineer (fingers crossed!). Now with the open hole he just loves grossing out his sister by pushing his tongue through and to our amazement the tooth right next to the missing one is already beginning it's first wiggle! I told Uriyah at this rate by this time next year he'll be all gums :) 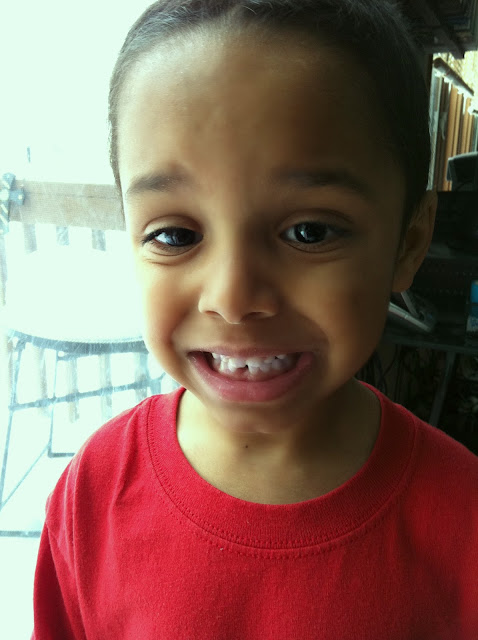